View cart “Yoda “Judge Me By My Size, Do You” Handmade Messenger Bag” has been added to your cart.

Each of these sticks is about 2” in length (may be a little more, may be a little less)
Palo Santo, literally meaning “holy wood” in Spanish, is a tree that is widely distributed throughout Central and South America. Palo Santo is used in South America in much the same way as White Ceremonial Sage is used in North America- to combat negative energy and to cleanse the space. Palo Santo is different than many of the other smudging materials as it is fragrant in its raw form and does not necessarily need to be lit, though it usually is when being used for ceremonial purposes. Palo Santo is often used by Amazonian shamans in sacred plant spirit ceremonies; the rising smoke of the lit sticks is believed to enter the energy field of ritual participants to clear misfortune, negative thoughts and to chase away evil spirits. Its use reportedly dates back to the Inca era.

Be the first to review “2” Palo Santo Sticks” Cancel reply 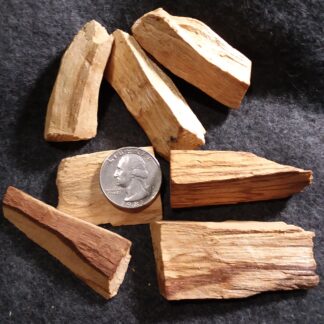